What is SQL Explorer? Print

It enables you to create, edit and save SQL queries and then explore and visualize your data using a range of ready-made charts.

Getting to the screens

From the SQL Queries screen, you can: 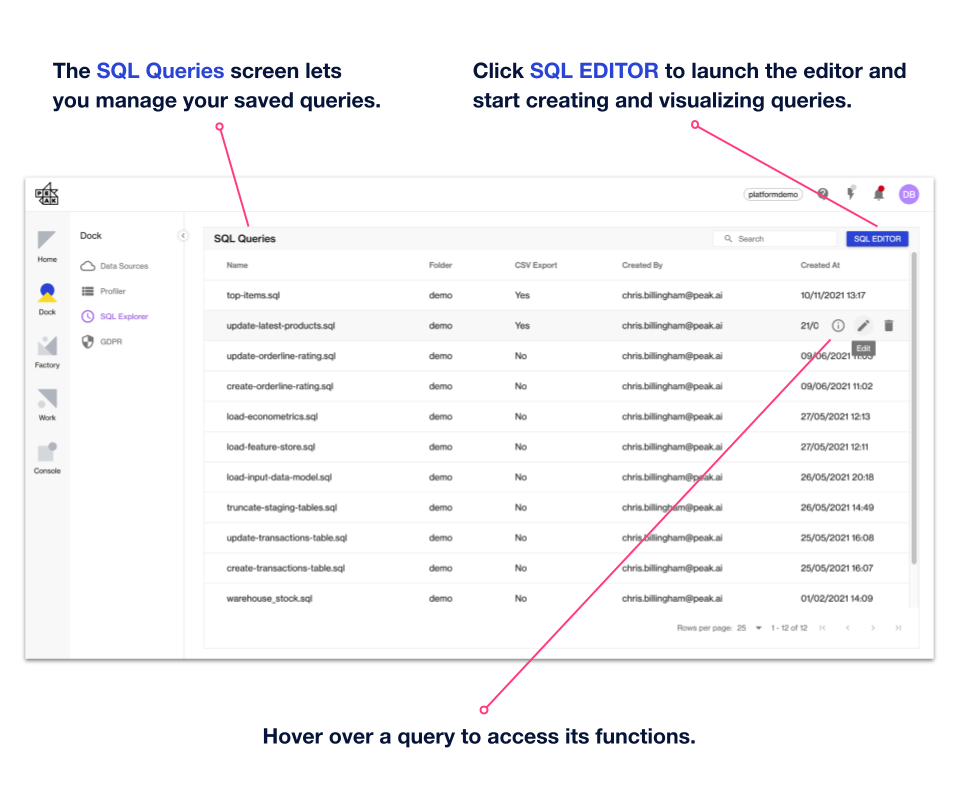 Hover over a feed to access the following functions: 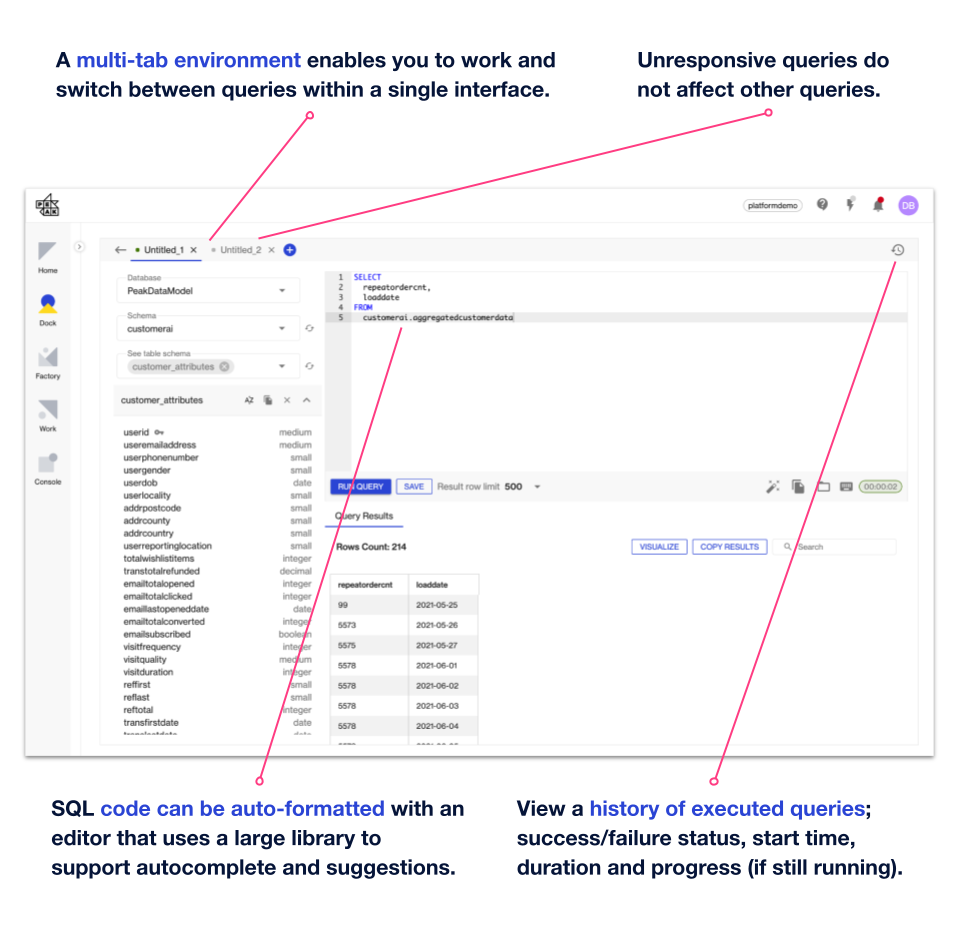 The interface uses tabs so that multiple queries can be edited and executed simultaneously.

Unresponsive queries will not affect other queries

If you are running multiple queries and one becomes unresponsive, a new worker node will automatically start up to handle your ongoing queries.

You can then stop the misbehaving query and make any necessary changes to it, such as reducing the row limit.

History of executed queries is available that includes their success/failure status, start time, duration, and progress (if still running). 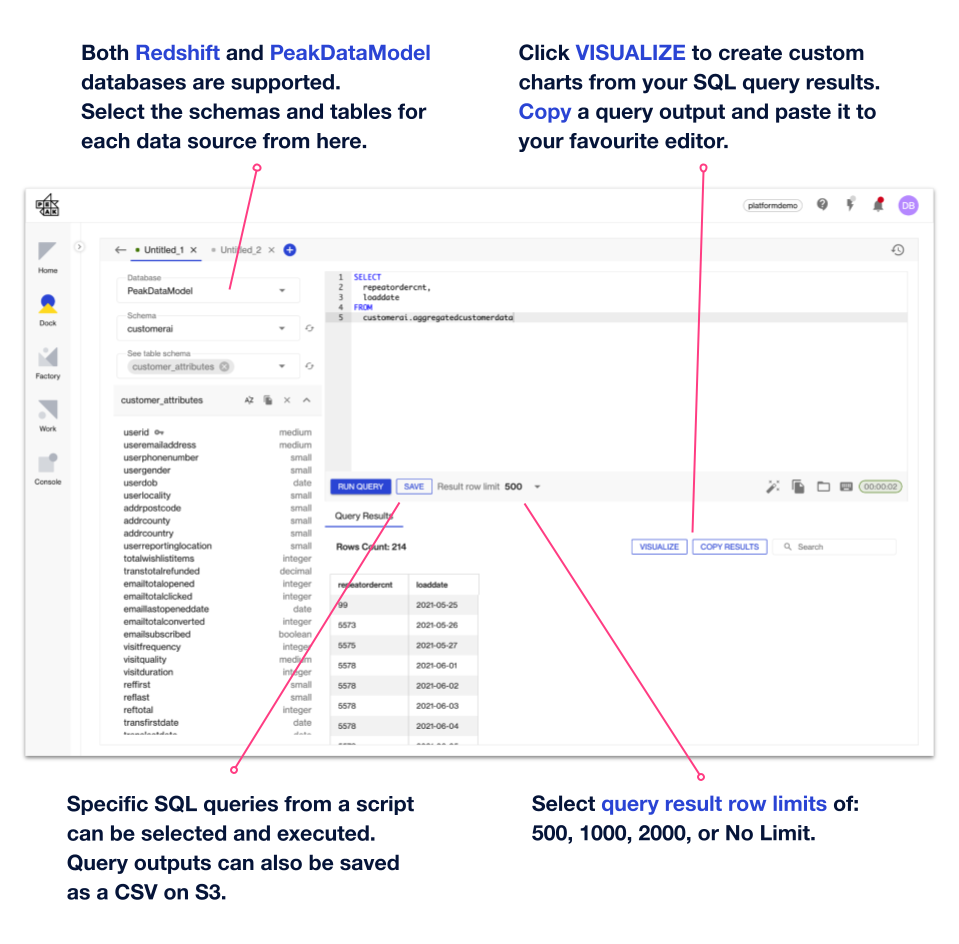 Support for multiple databases and schemas

Users can view the schemas for the selected database type and can preview the schema tables along with their attribute lists and datatypes.

SQL editor enables you to visualize your query outputs using a range of ready-made charts.

The VISUALIZE button is only available once a SQL query has executed successfully and a response is available.

The VISUALIZE button is disabled in these conditions:

Once your query has run successfully, click the COPY RESULTS button to copy a query output and paste it into an editor without loosing its tabular formatting.

You can select query result row limits of:

If you have selected No Limit, you can specify your own limits in your queries.

In addition, if you are running queries with no limits, you can run Top queries on your datasets.

If you are using the No Limit option while running queries for a large output dataset, the system might experience performance issues and the tab can go into an unresponsive state.  It might impact other running queries as well.

The system will return results on UI that are up to 5Mb in size or 10,000 rows, whichever is less.

Select and execute specific queries from a script

Scrips can contain multiple SQL queries within them.

SQL editor makes it possible to select specific queries from a script and execute them and also to abort queries that are running.|

Save query outputs as a .CSV on S3

The system supports the DDL command for the Redshift database according to the access permissions that have been granted. The DDL command will auto-commit once it has been executed. 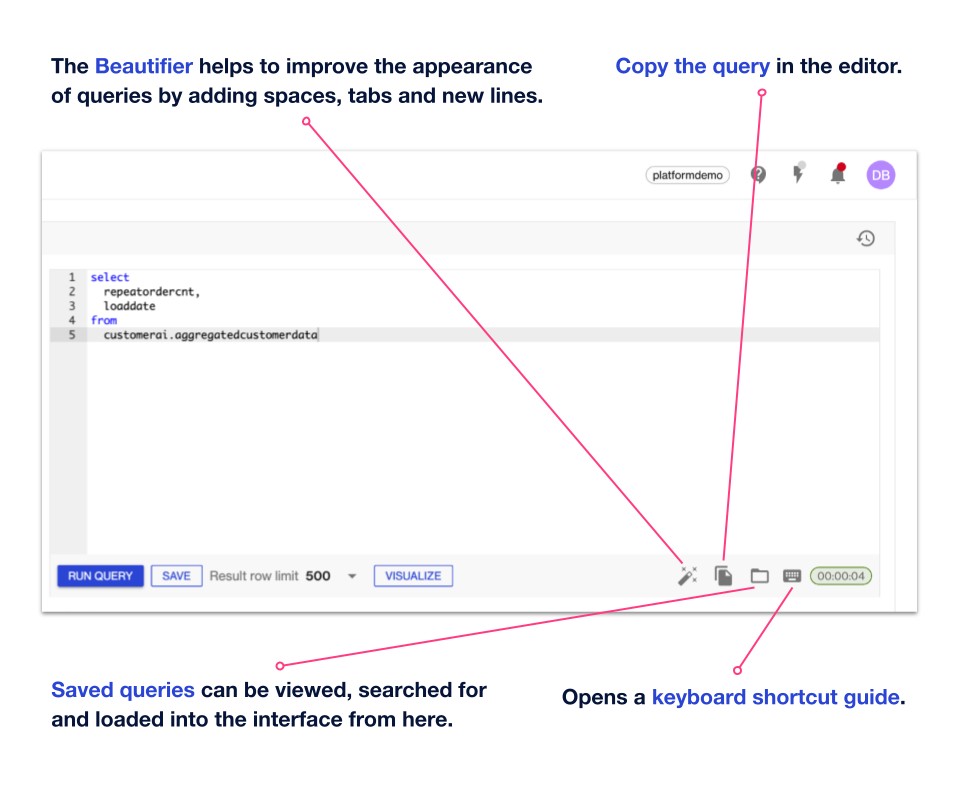 This helps to improve the appearance of your queries by adding spaces, tabs and new lines wherever they are needed. It is especially useful for SELECT statements, but can also handle INSERT, UPDATE and DELETE statements. It is agnostic of the database that is targeted.

Did you find it helpful? Yes No

Send feedback
Sorry we couldn't be helpful. Help us improve this article with your feedback.